C7 Chord (Made Easy): 5 Ways How To Play it On Your Guitar 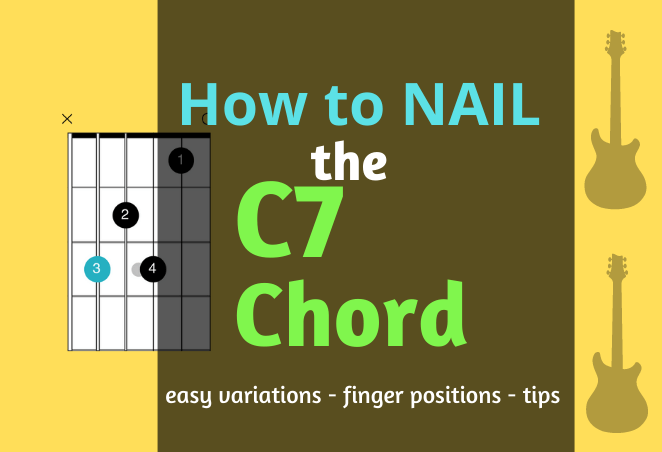 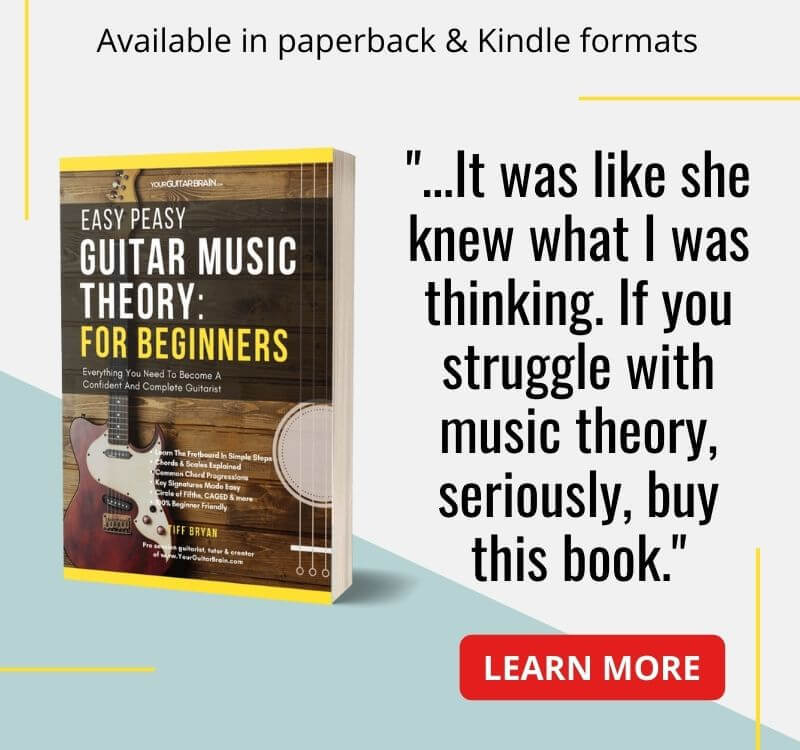 C7 is one of those guitar chords that crops up time and time again in songs. This four-note chord has an expectant sound that almost feels like it's a little unsure of itself.

If you've read the previous posts in our essential chord series, you'll know when a chord is spelt with a root note and the number seven (e.g. C7, B7, G7) it is actually a dominant seventh chord.

Songwriters often place a dominant 7th chord, such as C7, before a more stable chord, like the Major triad chord of a key. You can also swap it into a song as a spicy twist on a bog-standard Major chord (be careful that added flat 7th note doesn't clash with any other melodies going on, though.)

The C7 chord appears in a variety of popular music genres but mainly Blues, Jazz, Country and Classical.

Let's get down to brass tacks and check out the C7 chord charts.

Good to know: I show the best fingerings in the chord diagrams below. The chord notes are shown below the boxes, with the C root highlighted in blue.

Our first C7 chord shape is very similar to the standard open C Major chord shape. As with the Major chord, you ignore the low E (6th) string and play the other five strings when playing this shape.

Make sure your pinky finger is up to par, as you place it on the 3rd fret of the G string to get that flat 7th (Bb) note into play: 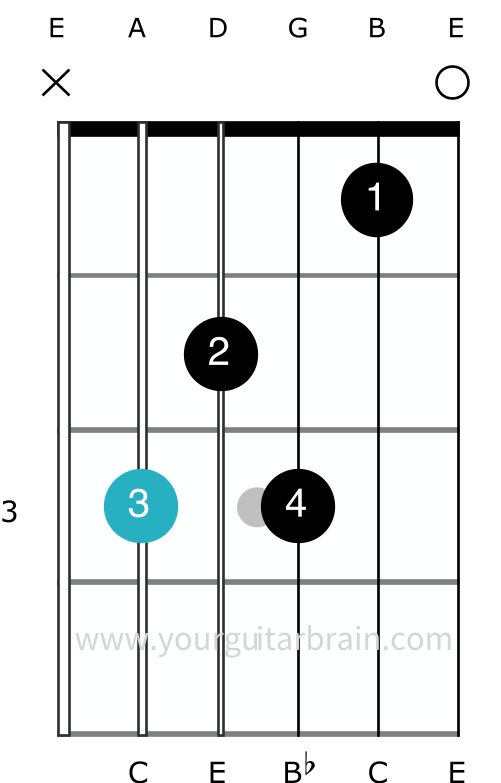 Top Tip: If you can't play the open C Major chord shape consistently clean, work on that before learning this C dominant 7 shape. Don't run before you can walk.

This next C7 variation is an easier stepping stone shape to try if you find the previous shape tricky. You only play the A, D and G strings here, so don't expect this chord shape to sound as meaty as the last shape.

Build your finger strength up with this variation then you'll be all set to play the more complicated shapes. 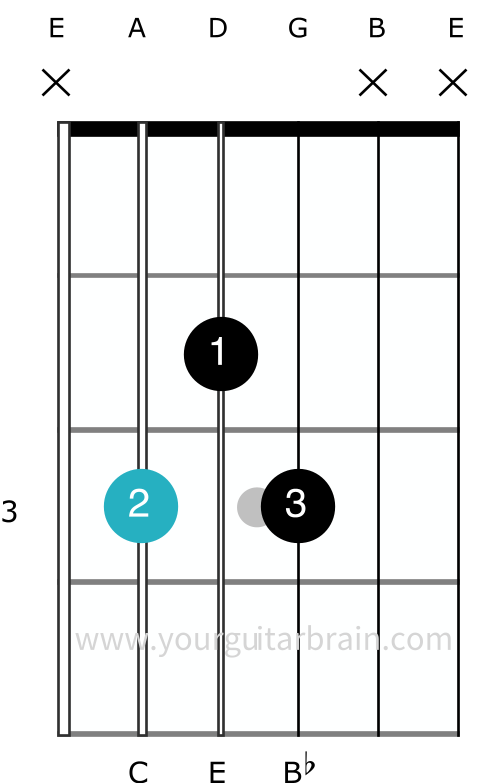 Top Tip: Mute the low E string by lightly resting your thumb against it. Doing this will also help your fretting fingers curve around more, thus helping you to get the notes ringing out clearly.

Here's a refreshing way to play a C7 guitar chord for you. Similar to shape two, your pinky plays the 3rd fret of the high E string.

Despite this chord variation having four fingers, as opposed to three as per the previous shape, you don't have to mute as many strings. Because of this, you may find it easier to play. 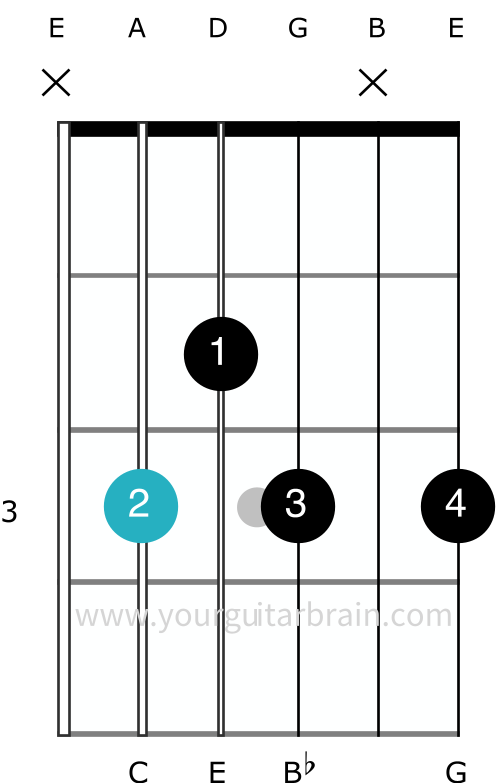 This next tried and tested C7 chord shape is based on an open A dominant 7th chord (A7) shape. All you do is add a barre with your index finger across strings 5-1 at fret three. 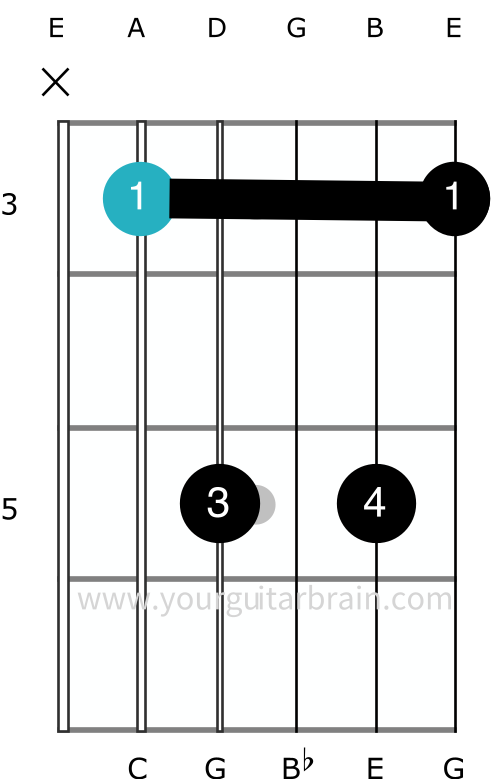 Top Tip: Don't place your index finger on top of the low E string. As you can see from the "x" above it in the chord diagram, we don't include the 6th string in this shape.

You will greatly benefit if you practice resting the tip of your index finger underneath the 6th string to mute it. This will help tidy up the barre chord if you accidentally hit it when strumming it.

It will take time and patience to play this chord cleanly, so commit to regular focused practise sessions, and you'll get better and better every day.

This final C7 chord shape is a movable barre chord shape. We can move a moveable chord up and down the fretboard with the same fingerings and shape.

The chord quality (e.g. dominant 7th) stays the same, the only thing that changes is the root and pitch of the chord (e.g. C).

Bearing that in mind, once you perfect this C7 barre chord shape, you can play all 12 dominant seventh chords that exist in music! That's what I call a home run.

We base this shape on the open E7 chord shape: 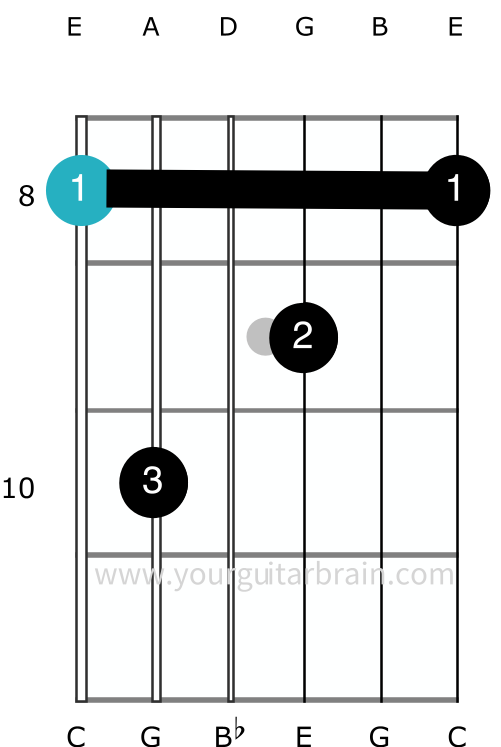 Top Tip: One of the best ways to get your chords sounding clean and clear is to practise them correctly. By this I mean you should plan out your guitar practice and play drills such as this one:

Pick the strings one after the other, ascending and descending (low notes to high) with a metronome and repeat for 10-15 reps of 30-60 seconds. The idea is to get the notes sounding clean and mute and buzz free.

If your fingers ache, after the rep time is up, rest them for 15 seconds, then carry on. You won't make much ground with new chords if you get bored after a few minutes and give up.

It's about time spent at the bench and being disciplined when you practise (resist the urge to keep checking who that latest notification alert is from!).

Most of all, it's about believing in yourself. You have no limits, as long as you practise smart, you can be as good as you desire on the guitar. Go for it Amigo!

Playing the guitar becomes more effortless and fun when you have more chord shapes under your belt. Even more so when they sound 100% clean and crisp. With that being said, get practising and have a blast!

Be sure to check out our other essential chord guides below.