Shy & Nervous Playing Guitar In Front Of Others? Here's 6 Ways To Overcome Your Fear

If you feel like an anxious wreck at the thought of playing guitar around other people, you’re not alone. We'll help you tackle your fears & boost your self-confidence in 6 quick steps. 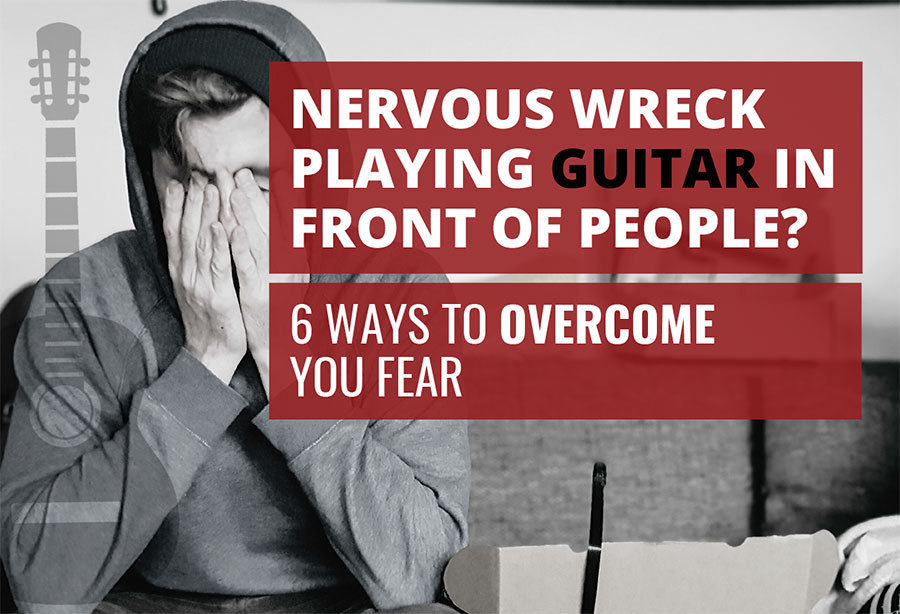 Photo by Christian Erfurt on Unsplash

You're here because you feel shy and nervous at the thought of playing guitar in front of other people.

Maybe you’re afraid to practice in ear-shot of others fearing they’ll judge?

Perhaps you have a performance coming up you're worried stage-fright will ruin? Well, I have news for you...

And you don't just need to be a newbie beginner guitar player for your stomach to churn at the idea of people listening to you playing.

You see, even seasoned guitar players who’ve been playing for ages feel nervous when it comes to playing nearby others.

Anxiety about playing when people may hear you can become such an issue with some guitar players that it starts affecting their enjoyment of playing.

If this is you, the truth is, you may be killing your chances of progressing on guitar unless you start to overcome your fear of failure.

Because overcoming lack of confidence is a real battle for a great deal of guitarists, we have 6 golden pieces of advice that’ll help you tackle your anxiety, boost your confidence and overcome that crippling self doubt. 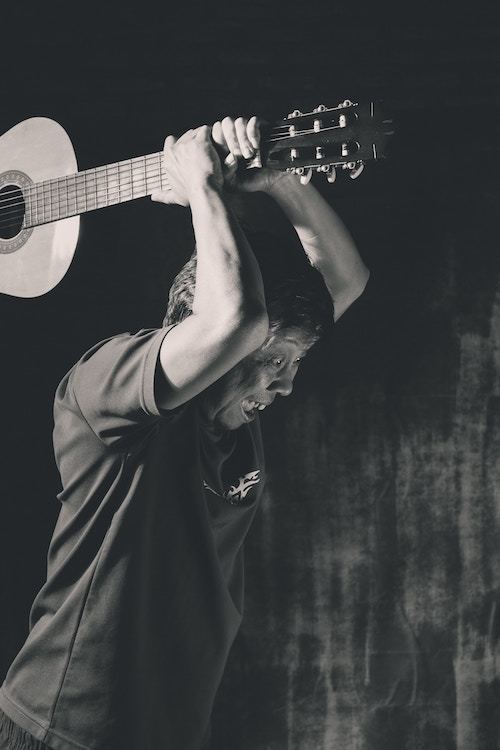 Photo by Ali Yahya on Unsplash

Fear and anxiety of playing guitar in front of others can lead to frustration and falling out of love with playing - and we don't want that!

Step number one in your offensive to beat your playing anxieties is to set realistic goals, and focus on learning some simple well known riffs & songs first.

Many newbie players make the huge mistake of trying to learn complicated pieces of music too soon. This results in you feeling you aren’t good enough, or ‘not cut out’ for guitar.

This in turn makes you dread the thought of someone listening to you practising and making snarky comments.

Action Steps - Choose 1-2 simple guitar riffs to start learning. Think, Come As You Are, 7 Nation Army, or Satisfaction. If you’re stuck for more riff ideas check out these brilliant easy beginner guitar riffs. When you've nailed them, add another one to your To Do list.

Next, decide on one or two easy beginner friendly songs with simple chords and strumming patterns to start learning. Make a commitment to learn them from start to finish. Nobody wants to be that guy who 10 years down the line still doesn't know how to play any songs all the way through.

"When learning to play guitar get rid of any self-doubt & anxiety - you rock. Remember: confidence comes with competence."

The more you practice the riffs and songs, the better they’ll sound. If you hear someone hanging about outside your practice room, throw in a few riffs between those important but repetitive practice drills.

If you share a house, dorm, flat or whatever with other people who've never picked up an instrument in their life, they might be clueless about what it really takes to learn an instrument.

Most people don’t realise you can only make sweet music on an instrument when you’ve actually learned how to play. And this requires practice. I don’t need to tell you, but proper practice calls for repetition. And lots of it.

You’re meant to be working on developing technique, strength and control. Practice is about developing your ear, playing that intro over and over to smooth out the kinks, learning theory, working out chords in songs etc.

Action Steps - Briefly enlighten people earwigging on you practising the difference between playing songs and practice. Ask them this: could a 90 pounds overweight guy run a marathon with only a weeks training?

No. he’d have to build up to it with days, weeks and months of hard work. Learning to play the guitar is the same. To be able to play songs requires you learn how to master playing the guitar first.

" To be able to play songs, you have to learn how to play the guitar first. " 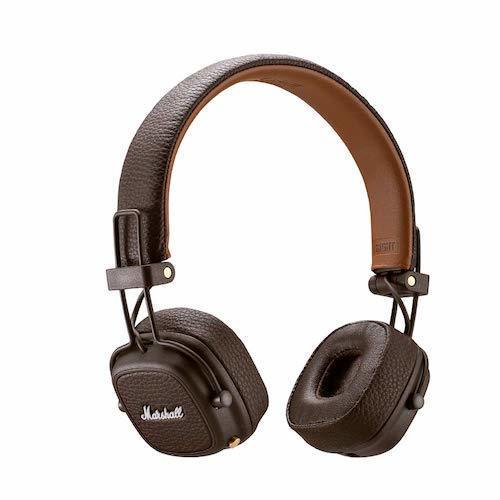 One thing I notice with some of my beginner pupils is they strum and pick too quietly. I know why they do it, as I fell victim to this when I was starting out learning guitar. I, like them, was so worried what people would think if they heard me practice, I’d play as quiet as a mouse.

This isn’t a good idea for your technique or sound.

You need to play loud and proud - as long as you’re not waking up or bothering the neighbours of course.

Action Steps - If you have a guitar with a pickup you can plug-in (electric guitar or electro-acoustic) and you’re paranoid you’ll annoy other people when you practice, plug in and play.

All you’ll need is some headphones and a small home practice amp. Now you can practice away without worrying you’re being judged.

Top Tip: There’s plenty of things you can be practicing without making sound too. Work on getting your chord changes faster and smoother by using the looped pair strike method for example.

Develop finger independence and speed by playing new scale drills moving your fretting fingers only, or try taking out 20 minutes to read through some music theory.

I always tell my pupils who ask for advice on how to overcome their paranoia of thinking people are scrutinising their playing not to assume the worse.

Whilst there are the annoying people who’ll ask “how many songs can you play” after you’ve been learning guitar for only a week, or the morons with sarcastic digs - most people realise it takes time and dedication to learn a new skill.

You’d probably be surprised to know that if anyone does happen to hear you practicing, they’ll be thinking how much you’re coming on wishing they could do what you’re doing.

Action Steps - Quit being tough on yourself. Don’t spend time assuming you sound terrible. Most people who hear you playing will either think you sound great or won’t really care because they’re too busy stressing over their own worries.

The truth is, even if you’ve only been playing for a few weeks, you’ll already be sounding a million miles better than you did when you started.

My job as a guitar tutor is not just showing my pupils what to learn. I am there to encourage, motivate and inspire.

Do plenty of research and find yourself a great guitar teacher who will give you advice and encouragement to help you on your learning journey. Ideally find a teacher who's been personally recommended to you. Personal testimonial is important, as there are plenty of ropey sub-standard guitar teachers out there.

Having lessons will build your confidence to play in front of other people as you'll get used to playing in front of your teacher every week.

You'll also improve your playing skills much quicker with lessons than you will struggling on your own.

This is the most important bit of advice anyone can give you to help you beat your fear of playing in front of other people - don’t give a stuff what anyone else thinks.

To overcome your fear of what others think of you, use the Kaizen ethos (continuous gradual improvement) summed up in this quote:

"Never be so afraid of making mistakes that you stop taking actions."
- Kirtida Gautam

I know from personal experience this is easier said than done (believe it or not, when I started playing I was very shy and scared to death of playing in front of anyone), but work on building your confidence with baby steps, as is the Kaizen way.

You’re learning a very intricate new skill, anybody who’s ever achieved anything in life know’s success doesn’t happen overnight. As long as you're playing isn't interrupting anyone, who cares what they think?

If you’re friends poke fun at you or criticise, this is merely a mask to hide their own deep rooted insecurities and jealousy. And ask yourself, are they really true friends if they’re being such negative idiots to you? You know the answer.

"When learning to play guitar, get rid of any self-doubt & anxiety - you rock. Remember: confidence comes with competence."

Action Steps:  Work on developing more confidence and a strong sense of who you are. You’re somebody with the courage and get up and go to do something that millions of others would love to do but are too lazy or afraid to do.

Consider looking for others to jam with. This is not only a good way to get used to others hearing you play, but it'll help your listening and improvisation skills improve too.

You don't need to be plagued by feelings low self-esteem and shyness all your life. It's in your hands to make the decision now - enough is enough! I'm not going to let others opinions bother me.

Remember, everyone else is so wound up in their own headspace, they don't really care what you're doing.

You're fulfilling a lifelong dream of learning to play guitar. You rock. Don’t let anyone tell you any different.

Reading motivational books on building confidence and the power of self-belief is a great move to help you build your overall self-esteem. Here are some of the top recommended books to help you.

1. Good Vibes, Good Life: How Self-Love Is the Key to Unlocking Your Greatness
2. The Power of Self-Confidence: Become Unstoppable, Irresistible, and Unafraid in Every Area of Your Life
3. The Subtle Art of Not Giving a F*ck
4. Secrets of Performing Confidence - For Musicians, Singers...
5. The Inner Game of Music

Recommended Further Reading For You 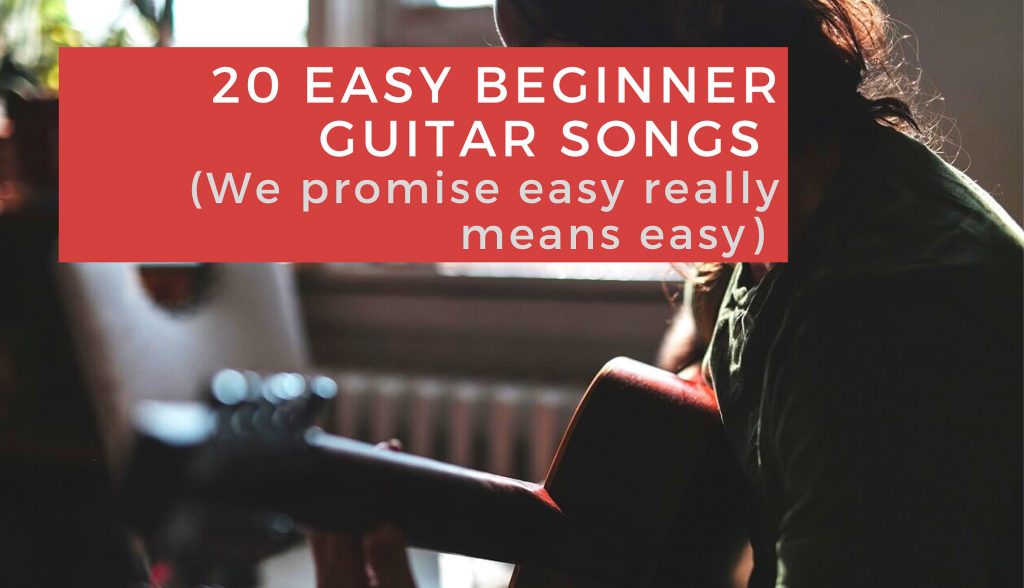 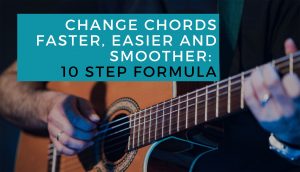