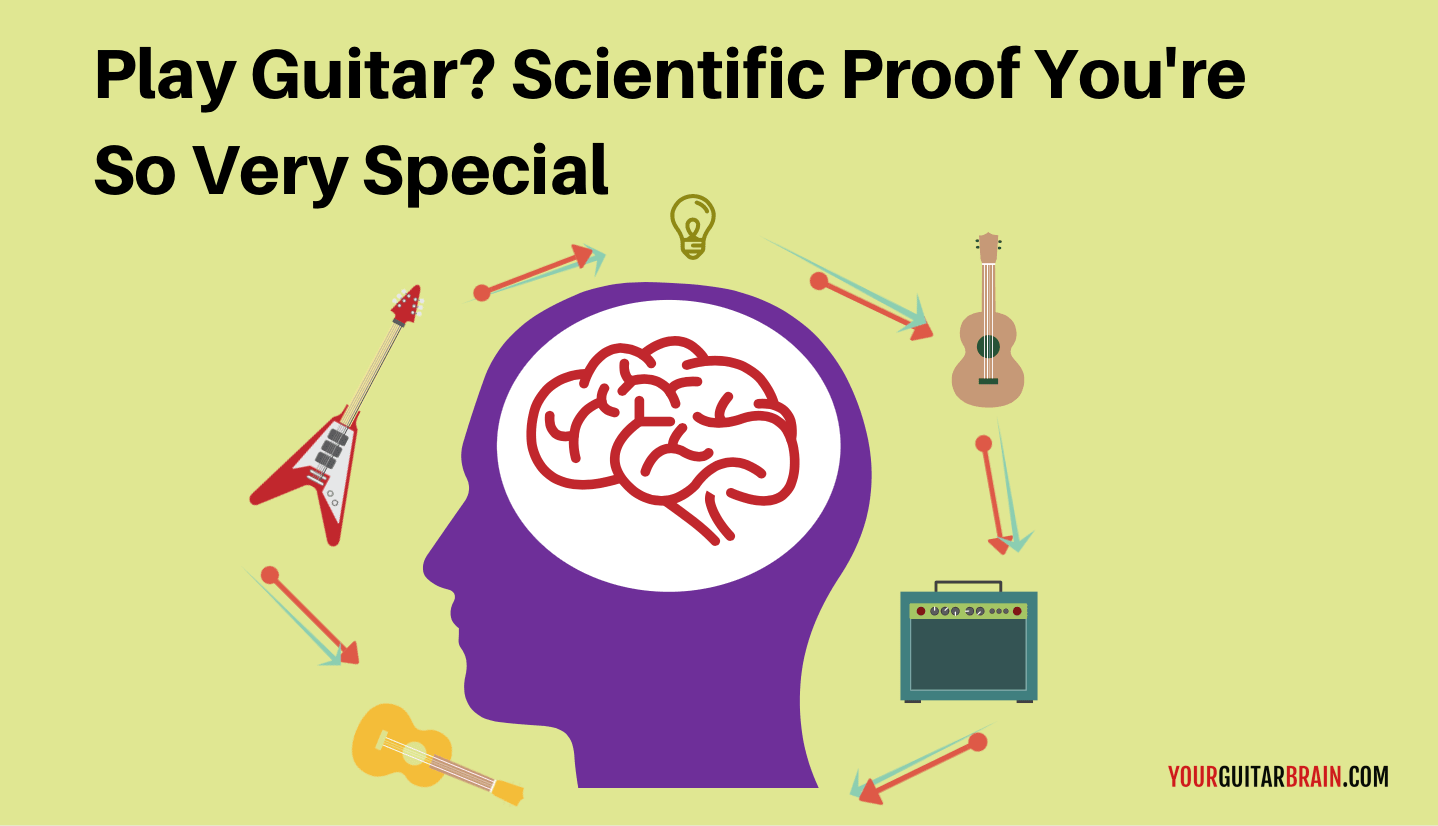 It had to happen.

Official proof that us guitar players are better than everyone else.

Ok, I’m trying to wind up any drummer who may have stumbled onto this page. But it is true. Guitar players have special brains.

So. Listen up Mr/Mrs Guitar player...

What I'm about to tell you is the truth about guitarists... you'll have the power to claim the ultimate bragging rights...

In the last few decades neuro-scientists have made breakthroughs in unlocking the mysteries of the brain. And now they've got their sciencey mits on us guitarists.

Party In Your Brain

Your brain is made up of around 100 billion nerve cells called neurons. Every little thing you do, from making a cup of tea, to driving your car causes these neurones to fire in specific areas of your brain.

Studies have been carried out where brain scans have been taken of people performing various tasks.

And it seems a little bit of magic happens when people listen to music.

Multiple areas of the brain dance with activity. That'll be those neurone guys zapping electro-chemical signals through your brain synapses along complex neural pathways.

You see, nearly all areas of your brain fire into action when you play your guitar. Notably the motor, visual, and auditory regions. 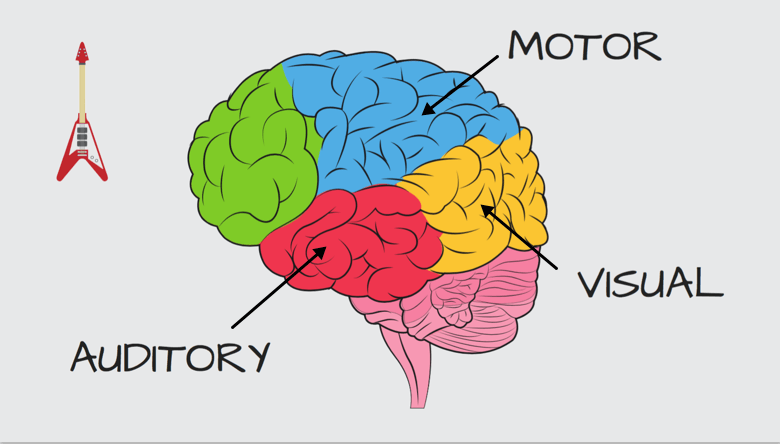 Playing guitar fires up most of your brain. Especially the motor, visual and auditory areas.

When you play guitar activity increases in the Co﻿rpus Collsusm, the area of the brain that links your rational left brain, with your creative right brain.

This means that guitarists aren’t just right brained, creative types. We use both our creative right brain and the thinking left brain at the same time.

And it gets better.

Learning the guitar actually rewires your brain over time so you have faster access to the thinking left brain area. As a result, your guitar playing isn't the only skill that gets better.

Other cognitive functions that improve include:

Now, the really interesting thing is, we don't just use both sides of the brain simultaneously and that's that. Further studies have revealed a guitar player can switch between left and right brain priority. Like a switch...

Picture this. The lights are low. You’re in the middle of an awesome band rehearsal. You’re guitar is slung round your neck. You’re eyes are closed as you’re ripping out an amazing solo.

Without thinking, you slide down the neck into some huge, meaty open chords. The drummer, bassist and rhythm guitarist all instinctively follow your change.

Whether you’ve experienced this, or are working towards improving your playing ability so you can do this awesome trick, it’ll all be thanks to one thing…

In a study into the neuroscience of improvisation fMRI brain scans were taken of 2 guitar players as they jammed. The scans revealed the guitarists were able to switch to the creative left area of the brain and at the same time deactivate the rational right area of the brain.

This means that a skilled, well practiced guitar player is capable of mind control.

It gets even better…

The skill of being able to improvise along with all the other techniques a guitar player develops, get better and better the more you learn to play guitar.

What more excuse could you need to grab your guitar and practice?

This next scientific insight into the special nature of a guitarists brain is a gem.

During scientific research carried out at the Max Planck Institute for Human Development, EEG scans were taken of 12 guitarists whilst they played together. What they found was astonishing:

Within-brain phase locking as well as within-brain and between-brain phase-coherence connection strengths were enhanced at frontal and central electrodes during periods that put particularly high demands on musical coordination.

In English: The guitar players brains synched together. And not only as they played, but right before they played.

So next time you see a band with family members such as Van Halen playing, show off to your mates and say something like; “ahh, I see the classic within-brain phase locking in action characteristic to musicians”. 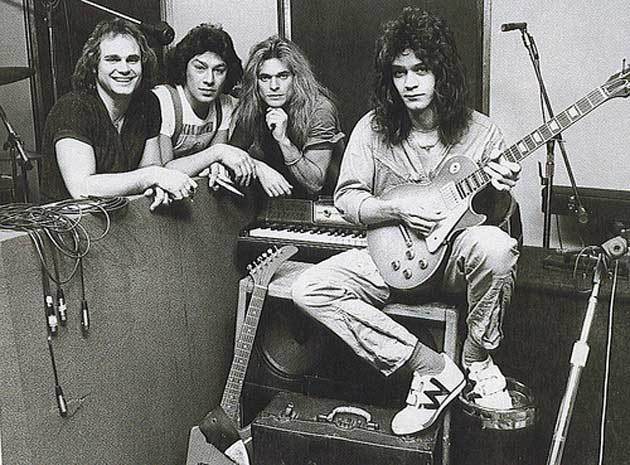 Guitar Players May Learn Differently To Other Musicians

Guitarists tend to learn songs differently to other musicians. Just how differently?

Vanderbilt University Psychologist Gordon Logan conducted a study which set out to answer that question.

Tests were carried out with Logan, Jerry Kimbrough a musician from Nashville, and Matthew Crimp, Professor of psychology.

The findings concluded that guitarists are better at learning using listening and observation skills.

As Logan put it:

The fact that guitar players don’t read music too often frees up their eyes so they can look at their hands. When you play piano or violin, you are trained not to look at your hands.

Let me play devils advocate here for a minute.

It is up for debate if the conclusion from this study is proof that guitarists really do have better listening and observation skills than other musicians. Afterall, it's not just guitar players who often learn to play by ear instead of reading music. And this was one of the deciding factors in the study findings.

Also, if you've learned to play guitar with correct and solid technique, you shouldn't be looking at your hands all the time either.

Whatever you may think, it'll sure cause some heated debate if you bring the subject up around any fellow muso buddies when you next see them.

Beat The Signs Of Old Age

And so to our final example of why guitar players can boast that they're brains are that little bit different to other folks. Ok, so with this one we'll have to welcome other musicians into the 'special' club. But still, this'll give you one more string to your guitar playing bow...

Everyone wants to keep their mind healthy, active and sharp as they age right? Well as a guitar player you may just have it covered.

A neuro-psychology study into 'the relation between instrumental musical activity and cognitive aging' of 70 older people found that musicians may have brains that function better into old age than non-musicians.

In a series of cognitive tests, musicians with at least 10 years playing experience were found to excel in various mental tasks. Particularly visual memory.

Musicians’ IQ scores on average were higher than the non-players.

Wait. Don't go rushing out shouting from the roof tops about how smart you are just yet. Remember, this was found to be true of competent musicians, with no less than a decade playing experience. Going and buying a guitar and bashing about on it for a few months wont make you Einstein.

Continual learning, practice and improvement will get you that bit closer though.

To sum it all up then: It’s clear that learning the guitar isn’t only good for the soul. It’s good for your brain too.

So next time you pick your guitar up, with a knowing smile tell yourself…I’m special I am.

Previous Post 10 of The Best Fingerstyle Guitar Covers On Youtube Next Post 10 Step How To Change Chords Faster, Easier and Smoother Formula (That Works Every Time)